This article is for all the Twilight fans out there who loved the Twilight House in the movie and wondered if it was real or not, we will provide all the details about the beautiful home shown in this movie series, so keep reading to know more!

Twilight is one of the most loved fantasy movies of all time in which Robert Pattinson and Kristen Stewart played the roles of the main characters. However, Cullen’s home caught the audience’s eyes more and people started looking for the location of this beautiful home.

After watching this beautiful mansion in the movie, the fans of twilight have been searching to know about the twilight house on Airbnb, so if you are also the one looking for the details of this mansion along with the featured twilight Bella’s house, stay connected till the end!

Is Twilight House located in Washington? 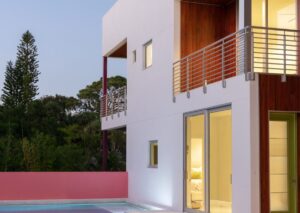 This is a commonly asked question and people think that Cullen’s home shown in the movie is in Washington but that’s not true. The Olympic Peninsula in Washington State is the setting for the movie “Twilight.” But did they actually film in the state of Washington?

The filmmakers discovered the house they wanted in Portland, Oregon. This house was supposed to be sold to someone from New York, but they pulled out after 9/11, forcing Jeff Kovel to move into his own home. If you want to know more about this spectacular house then keep reading!

Where is the Twilight House (Cullen’s home) located?

This amazing mansion is located in Portland, Oregon and it is called “Hoke House”. It was constructed between 2006 and 2007 and its address is 3333 NW Quimby St, Portland, OR 97210. The building is named after John Hoke, who worked for Nike as a director of footwear design.

The twilight House gained attention after Edward took Bella to his house to meet his family for the first time. The residence is surrounded by trees and includes sound recording security cameras and is located on the edge of Portland’s Forest Park.

John Hoke built the house for his family, and because of his profession, the Twilight characters dubbed it “The Nike House.” Jeff Kovel of Skylab Architecture and Metcalf Construction built the Hoke House.

The fans are curious to know about the twilight house on Airbnb, it is not available for visiting and it was sold for 2.5 million in 2007, hence it is a private residence.

Clear glass windows allow the natural light inside the house even though the vampires shine in the sunlight but it is considered a safe place for the Cullens. This classy and unique home is surrounded by tall trees which provides the feeling of peace.

This appealing residence has beautiful furniture with a distinctive fireplace and the hardwood granite tops on the kitchen surfaces complete the elegant look of Twilight House. It has four bedrooms and three bathrooms and the walls are painted white so that they appear wide.

Its open dining space with overhead lights and distinctively designed seats is perfect for dining. Its glass exterior gives it a modern but mystical feel and it looks like it surely belongs to vampires as we have seen in the movie.

Where is Bella’s House located?

In the movie twilight, Bella’s house has also caught the audience’s attention and people started to search for the location of this Twilight house too. It was constructed in the 1930s and located in Saint Helens, Oregon which is about 30 miles north of Portland.

This two-story Twilight house was renovated in 1970 and it consists of five bedrooms. The living room, roof, and basement are the same as they were shown in the movie, even the dining table is still the same.

This place is also known as ”The Twilight Swan House” and this one is available on Airbnb for 330 dollars per night. It is a great opportunity for Twilight fans who want to relive the moments of the Twilight movie.

Details of other Twilight Houses:

New Moon and Eclipse is a part of the Twilight movie series which was filmed in another house. It is located in the West Vancouver, British Properties, 118 Stevens Drive, and was designed by Arthur Erickson and was renovated in 2001.

Even though it looked the same as the one located in Oregon but it was different and this mansion was listed for around $3.2 million when the filming was finished. Another twilight house (Jacob’s residence) is located in Coquitlam, Vancouver, British Columbia. It was painted before the shooting and it is a privately-owned residence.

You must have watched The Twilight Saga: Breaking Dawn – Part 1 and the house where Edward and Bella were seen enjoying their honeymoon is available for rent and is located in Paraty, Brazil. It has 6 bedrooms and 8 bathrooms and you can only reach there by boat or helicopter.

This Twilight house is the best place for those who want to enjoy their vacation far from the busy world. It is covered with skylights and banana trees but these great pleasures come at a cost of $3,512 per night.

The twilight movie is one of the most loved fantasy movies of all time and its parts were released from time to time. Besides its unique storyline and the beautiful cast, the house featured in this movie is loved by its fans and people wanted to visit Cullen’s home so we added all the details about its Airbnb, we hope you liked reading this article.