For over three decades, John Travolta lived in his luxurious Florida mansion along with his wife (late), so in this article, we will talk about the specifications and other details of John Travolta House. He continues to live here and often shares pictures of his personal on Instagram.

John Travolta is a fantastic actor who is best known for his roles in the films Hairspray, Grease, and Saturday Night Fever. His role in Scientology is also well-known. He is so rich that he owns planes and many properties across the US, he can also fly his planes.

Architectural Digest published breathtaking pictures of his Florida mansion in 2005 so if you are looking to know the details of his elegant mansion which is located in Florida, continue reading this article until the end! 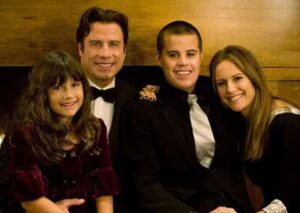 In July 2020, his wife Kelly Preston died at the age of 57 after suffering from breast cancer, they never disclosed the details to the public about her illness. John Travolta and Kelly Preston got married in 1991, and they suffered a lot when their son died in 2009, Jett was 16 years old at the time of his death.

John Travolta is so thankful to the doctors and the nurses at MD Anderson Cancer Center, who took good care of his wife. He is also grateful to his family and friends who stood by them during the hard times of his family.

He is now active on social media more than before and he thanked all of his fans and other people who supported him when he was grieving for his wife. Now, his two children Ella and Benjamin, and their dog whose name is Jinx live in John Travolta house in Florida along with John.

Why John Travolta is so famous?

John Joseph Travolta is his full name, and he was born on February 18, 1954. John rose to fame after appearing in the TV series Welcome Back, Kotter, and the film Saturday Night Fever (1977) which was a blockbuster.

He left his high school at the age of 16 to start his acting career and did commercials and small roles in Television series. After that, he appeared in many movies and TV series and was loved by his fans.

Where is John Travolta House located?

John Travolta House is located in the airplane community in Ocala, Florida. This 8,000 sq. ft. home has five bedrooms and seven bathrooms, a pool, a hot tub, and a pool house. Jumbolair Aviation Estates is located on 10 minutes flight to Orlando, Florida. He can easily fly whenever he wants.

The weather in this country always stays beautiful and he often flies with his friends across the country and he loves to use the pool area a lot. This is such a dream house and we are in awe after finding these details about John Travolta.

There are two runways in his yard meeting his front door which sounds amazing right? John extended the runway that was built at 7,500 feet so that it could meet his front door. He loves to fly and this place is perfect for him to live. If you are enjoying reading it, keep reading to know more!

The main living room which is also called a great room has tall curved walls and for an amazing panoramic view of the yard, there are ceiling to floor windows. A private control center and bed and breakfast quarters where pilots and other guests can stay for a night or two are outstanding.

For his incredible car collection there are 16 garages, he even said that they designed this house for the jets so they can travel anywhere in the world at any moment. His six aircraft include Bombardier Challenger 601, a USAir Boeing 727, a Boeing 707-138, and three Gulfstream jets.

The 550-acre neighborhood “Jumbolair Aviation Estates” is for elite people who often travel in their own planes and with a net worth of $250 Million, John Travolta is of these people. Check out the specifications of John Travolta house in Florida:

John Travolta is one of those rich people who have everything including their own planes and a runway outside their home. His mansion in Florida is a dream home of many people, we added every detail of his amazing home in this article and hope that you enjoyed reading the details of John Travolta House.