In this article, we will discuss the details of the stunning and luxurious Adam Sandler House which is located in Los Angeles. This American actor who is also a comedian and a filmmaker began his career when he appeared in “Saturday Night Live” from 1990 to 1995.

He started acting in movies such as “The Wedding Singer” and “The Waterboy”, then, in 1999, he founded Happy Madison Productions, his own production firm. The best of his created movies include “50 First Dates” and “Mr. Deeds”. Keep reading to know the details of his amazing house!

Adam Sandler House is located in the Pacific Palisades, CA, and his mansion is behind a huge gate that is covered by many trees so it is hardly visible from outside. His stunning mansion covers 12,860 square feet of area that has seven bedrooms and fourteen bathrooms.

Adam Sandler bought this home from actors named Goldie Hawn and Kurt Russell for 12 million dollars in 2004. He is among the richest actors and he owns properties in Malibu and Miami as well but he loves to live in his Los Angeles Home.

Adam Sandler house sits between the Santa Monica Mountains and the Pacific Ocean, Pacific Palisades is a neighborhood in Los Angeles. Conan O’Brien, who is also a TV personality and a comedian is among the neighbors of Adam Sandler and they shared an amazing bond and often talk about the time they spend together in each other’s home.

Being one of the richest actors, the Net worth of Adam Sandler is 420 million dollars which he makes through acting, comedy, and his production company. The specifications of his luxurious mansion are given below:

Apart from the gorgeous Adam Sandler house in LA, which has everything including a large Courtyard with a pool and sports area, Adam Sandler owns a next-door property as well that covers a 3,971 square feet area with four bedrooms and four bathrooms, valuing the combined properties at $28 million.

Adam Sandler already has a 420 million dollar wealth, his production company “Happy Madison” also has a contract with Netflix that assures him annual revenue of several million dollars when his company produces new comedy.

Why did Adam Sandler buy this LA mansion?

We know that Adam Sandler owns many properties in different places but the history of this one is weird which we found from different sources and as per reports, Adam Sandler and his wife Jacqueline Sandler were at a new year’s party at Goldie Hawn and Kurt Russell’s house in 2004.

During the party, Jacqueline Sandler decided to buy this mansion at that very moment and said this to her husband and the couple bought this gorgeous mansion for 12 million dollars in the same year that sounds strange! Right? 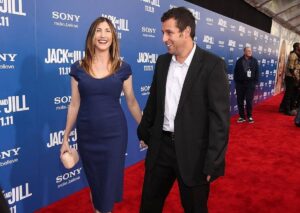 Everyone knows about his successful professional life but only some people know about his equally successful private life. Adam Sandler and Jacqueline Sandler (née Titone) have been married since 2003 and they have two beautiful children together.

As per reports, Jacqueline was born in Coral Springs and before trying her luck as a model, she went to Stoneman Douglas High School in her home state of Florida. After doing many fashion shoots, she started her career in Hollywood in 1999 and since then, she is doing great.

Did Adam Sandler’s wife change her religion for him?

Jacqueline was raised as a Christian but she converted to Judaism before tying the knot with Adam Sandler and according to reports, the couple married in a star-studded Jewish ceremony at Dick Clark’s Malibu estate.

For Adam Sandler, his faith is very important for him and he once said that “I’m pleased to be a Jew, and I inherited that trait from my father and mother”. We think that’s why Jackie decided to convert to Judaism because Adam is very conscious about his religion.

We hope you liked reading the specifications of his stunning LA mansion, if you want us to add anything or you have something to share about his stylish home, you can comment below.